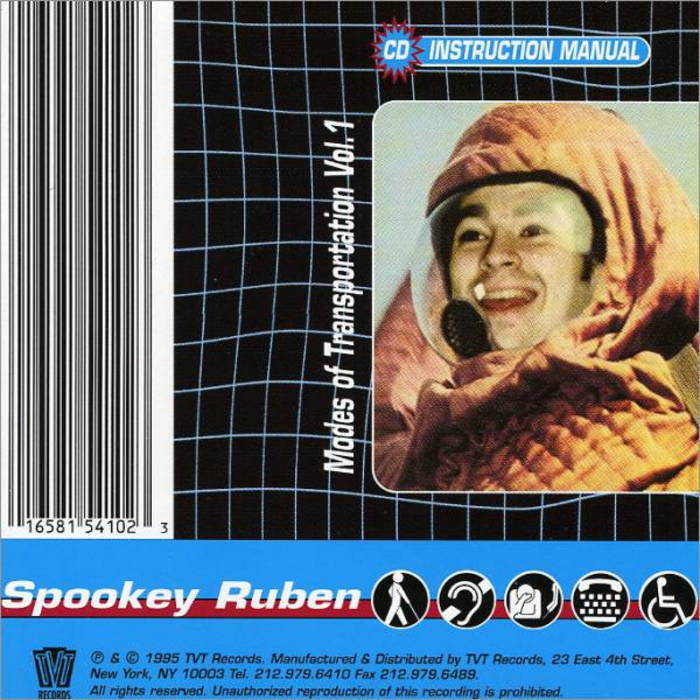 delphiey this album is actually just a fantastic example of creativity during the 90s Favorite track: Wendy McDonald.

After hearing the fairy-tale introduction, "Terra Magnifica," and the loopy yodeling in the opening minutes of "These Days Are Old," you can't help but recognize Spookey Ruben as eccentricity in its purest form. He also, however, proves himself an undeniably superb and original stylist on this debut long-player. If Andy Partridge and Colin Moulding had continued to explore the most cracked and esoteric terrain of Oranges & Lemons rather than further refining their pop/rock, or if Roland Orzabal and Curt Smith had lightened up considerably during the sessions for Seeds of Love, the results might have approached Modes of Transportation, Vol. 1. The songs range from the bizarre to the childlike to the strangely haunting, all with impeccably crafted pop hooks. There is a guilelessness throughout that is fascinating, especially when it turns dark, as on the lullaby "Crystal Cradle," where Ruben's voice lowers into Morrissey or Dave Gahan range without descending into misery or sounding threatening. Ruben's songcraft is grounded, not accidentally, in the '80s British new wave scene, from its oddly flexible melodies to its angular and brooding tone. Songs like "Welcome to the House of Food" and "Donate Your Heart to a Stranger" are sonically menacing, but the songwriter undercuts the mood with lyrics that are anything but and a relentlessly buoyant approach. At other times, Ruben breaks up the relative mellowness of songs with sound effects or collage techniques, and the artist's attraction to world beat elements ("The Size of You," "It's Not What You Do It's You") only heightens the exotic vibe of the album. It is a relentlessly artistic vision that never comes off as either pretentious or hollow because the naïve and silly qualities of the music play so enticingly off the duskier edges. As inventive as it is, the album perhaps draws a bit too freely from the XTC melodic bag of tricks, and occasionally Ruben's most experimental quirks sabotage his songs. But on the whole, Modes of Transportation, Vol. 1 is a confectionary treat.
-allmusic.com

Toronto's Spookey Ruben (a Virginia native who once led a DC thrash band called Transilience) is another of those inexplicable autonomous studio-pop auteurs who crop up every year, armed with the manifold instrumental aptitude of a music school, the vitality of a well-rested basketball forward and enough novel ideas to shame a team of TV writers. A visually oriented sprout from the Brian Wilson/Todd Rundgren/R. Stevie Moore garden of idiosyncratic production pop, Spookey skips merrily through his garishly dressed solo album, strewing evidence of skilled ingenuity and far-ranging imagination without obscuring the sturdy essence of his accessible songwriting. Just as "Welcome to the House of Food" isn't nearly as loopy as the title suggests ("Wendy McDonald," the second of his fast-food hallucinations, is), Modes of Transportation Vol. 1 — recorded with only incidental assistance on a few tracks — is less dense and disorienting than its packaging. Instead, the eminently likable album makes its insidious weirdness a pleasant surprise, whimsical bits that compete gently with Spookey's flexible voice.
-trouserpress.com [Ira Robbins]

Bandcamp Daily  your guide to the world of Bandcamp

Interviews With Butcher Brown and Slauson Malone, plus LP of the week by SAULT.